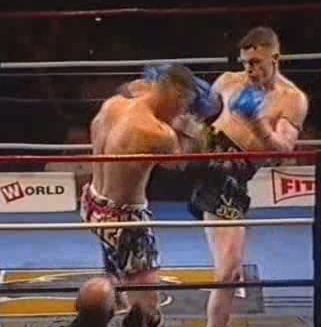 When the bell started for the first Greg come out throwing hard leg kicks and using the ring well. I was just feeling him out to see what he had then half way through the round started to let go with my own technique’s to let him feel my power to show him it was going to be a long night at the office.
[youtube_playlist]F5F5FCCCC3A55CD0[/youtube_playlist]
End of the first I thought there wasn’t much in it and could have gone either way. 2nd I started to pick it up a little as the engine was starting to get warm and getting in the swing of things, I landed some nice body punches that you could hear through the venue and also some nice knee’s, as the bell sounded I am pretty sure I took the round.
Third picked it up another notch and now everytime I flinched Greg would cover up making it easier for me to pick my shots.
4th was the best round of the fight, I really put the pressure on this round throwing lots of punch, kick and knee’s combo’s with plenty of power behind them, near the end of the round I landed a hook I think that put Greg on the canvas for a eight count, after seeing he was in trouble I thought this was my time to end it, I ran across the ring and unloaded with my hands to try and end it, I was half way through my combo when Greg let go with a upper cut which I didn’t see and I ended up kissing the canvas myself, now the crowd went crazy and the atmosphere in the room was thick as mud.
I got up straight away as it was only a flash down and even thought to myself that it was a good thing as now it was turning into a good fight, half way through the count the bell sounded to finish the round.
5th round I had plenty to prove and Greg also had grown in confidence after scoring a down. Greg came out hard for the first 30 seconds but then I put the pressure straight back on him till the final bell. At the end of the fight the crowd once again gave us a good applause as we both gave it everything we had and a really exciting fight. I was happy to hear the score cards and even more glade to get my hand raised after so long.