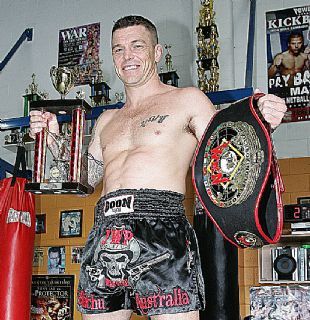 John Wayne Parr will attempt to silence his critics and win his seventh Muay Thai world title by facing Eugene Ekleboom later this month.
The King of Australian Muay Thai who has only just won his sixth world title in the 72.5kg weight category will go up a weight division to confront the man he believes is the last fighter he needs to defeat before contemplating his future in the sport.
“This guy is the last question mark,” he said. “On the forums, the fans say ‘you’ve got to fight this bloke. I’ve fought everyone they’ve wanted me to fight and this is the last one left.
“I fight not only for the love but I fight for money — I run a gym in Burleigh but if I want the toys I’ve got to keep fighting. I’ll be 34 next month and it’s a young man’s sport and hopefully I can fight for a few more years.”
He may be getting on but he certainly didn’t show it against Belarussian Dimitri Valent last month.
JWP said he was proud of his sixth world title which he dedicated to a Perth boy suffering from cystic fibrosis.
Read Full Article Here