JWP Vs Preacher I 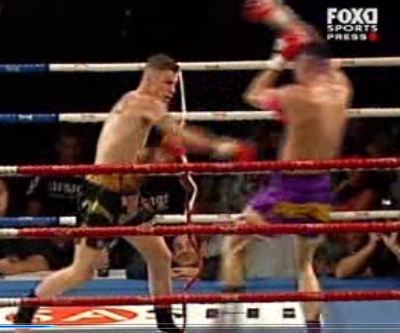 Had a great fight with Bruce Preacher Mcphee. 1st round took my time and let him attack me a little to show him I have good defense, only thing is first kick he threw I blocked and with his boney legs split my shin.

2nd round hit him with some nice body shots having him sucking on lemons a bit. 3rd I started to pick it up and caught him with a nice right hook putting him down and he did well to pull himself up off the canvas, 30sec later I put him down again with another right hook I think but half way through the count the bell went giving him 2 minutes in the corner to recover.

[youtube_playlist]21CF9BD29C837DEC[/youtube_playlist]
4th round Preacher showed a lot of heart and came out hard trying to win back the fight, but I would keep him at range and always looking for the opening. 5th round Preacher landed one nice combo during the round but I still controlled most of the round.
Bid probs to Preacher, he came to fight making it very exciting for the 4000 plus crowd. One of the best Muay Thai shows ever to be held in Australia I believe and make sure to have a look when it airs on the Fox December the 6th cause it really was an exciting fight.
Before I forget, Big thank you to Josh and Nugget having me on their promotion and thank you to everyone that supported the show from all over Australia.