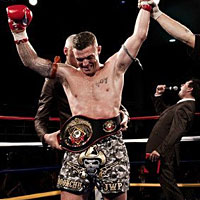 What a fight, that was one of the hardest fights I have had in years. Dimitr bought the craziest style with spinning kicks and elbows and they would come out of no where. I almost dropped him round three after 20 unanswered right hands to the jaw but that just made him angry.
So glade to get the win in front of such a amazing Perth crowd. The belt is cool as and the ring was a very nice little bonus I wasnt expecting.